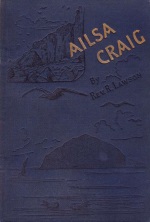 This eBook contains the Rev. R. Lawson’s book of 1888 entitled “Ailsa Craig: Its History and Natural History”. This is one of many books written by the Rev. about his local area of the Carrick district in south-west Scotland.

First published in 1888, ‘Ailsa Craig’ describes every aspect of this now uninhabited Scottish island. Roderick Lawson considers the possible origins of the name, and then goes on to relate the impressions of early visitors (including Daniel Defoe and John Keats). The author himself negotiates what Thomas Pennant in 1772 described as the ‘horrible’ and ‘alarming’ path to the ruined castle and tells of its history. In his lively and engaging style, Lawson also deals with the island as a place of work, as well as a haven for wildlife. This is a fascinating account of Ailsa Craig, and will be of interest to local and social historians, ornithologists, or indeed anyone who has ever looked across to ‘Paddy’s Milestone’ and wondered what stories it has to tell.