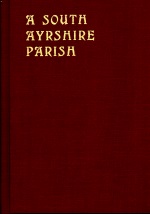 This eBook contains the Rev. George Turnbull’s book of 1908 entitled “A South Ayrshire Parish”. The parish in question being that of Dailly in south west Scotland where he was minister from 1869 to 1908. The book was edited by the Rev. John Torrance and in his introduction he writes:

From 1880 [the Rev. George Turnbull wrote] articles on the history and antiquities of the Parish to a supplement which he published monthly. These were written in a popular style for his parishioners, by whom they were much appreciated.

The Rev. Turnbull writes here on many subjects of interest, on the prehistoric and early Christian history of the parish, its place names, its connections with Robert the Bruce, on Ailsa Craig, on Bargany and the Kennedys, on the Boyds, and the Fergussons of Kilkerran, and also on the Coal mines of the area and finally of the local Convenanters.